Montecatini Opera Festival takes place in Montecatini Terme, the exclusive, renowned European thermal resort, situated in the bright Valdinievole landscape, in the heart of Tuscany. This town famous for its healing hot springs, gifted with natural as well as artistic beauty offers the visitor a great variety of valuable buildings of the period between the end of 19th century and Art Deco, which make the town an open air museum. Since the 19th century Montecatini has been the favourite meeting place of great European artists and composers. Quite a lot of them, including famous conductors, musicians, singers, librettists used to spend here moments of relaxation, thermal treatment and study. Gioacchino Rossini was one of the regular guests of the hotel ”Locanda Maggiore” where there is still now “his music room”. Giuseppe Verdi used to spend in Montecatini, then called “Bagni di Montecatini” long Summer periods from 1882 to his death in 1901 and here he drew inspiration for major parts of his operas, like the third act of Othello and the orchestration of Falstaff. Here Giacono Puccini composed “La Fanciulla del West” and near Montecatini he composed “La Boheme”. Gioacchino Forzano (the librettist of “Suor Angelica“ and “Gianni Schicchi”) enjoyed discussing the plans of new operas with Arturo Toscanini and Enrico Caruso and the realization of their new staging. Ruggero Leoncavallo moved to Montecatini in 1913 and lived here the rest of his life. The cultural life and interest for music have always remained alive in town, showing the innate link between Past and Present, making Montecatini spa a place where art and emotions are strictly connected. 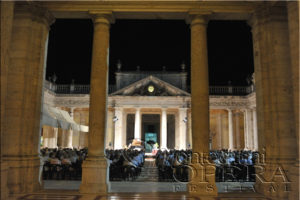 The Tettuccio is the ideal place for symphonic, choral and opera concerts for its refined elegance and the excellent acoustics. It can accommodate up to a thousand spectators, depending on the type of event. Discovered in 1370, the name Tettuccio derives from the roof initially built for shelter during the treatment. It was the Grand Duke Leopoldo who built the present thermal structure, with the facade that is now a national monument. In the twenties it was renovated by the florentine architect Ugo Giovannozzi. The artist Basilio Cascella adorned the Gallery with majolica and travertine marble. Other artists, such as Carlo Moroni and Galileo Chini decorated the reading room and the hall of the Post Office. Maria Biseo has painted the walls of the historical Café, which is one of the most fascinating Cafés in Italy and the right place for meetings, cocktail parties, dinner parties in conjunction with concerts. The writing room has lovely paintings about youth, joy, communication, progress and valuable furniture, chandeliers and various types of original furnishings. 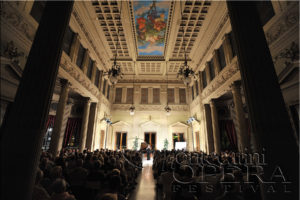 The Excelsior is the suitable place for chamber music concerts as well as for vocal and solo exhibitions. Its excellent acoustics and its architecture make it the perfect venue to enjoy music, recreating the same atmosphere as a late 19th century salon. Its hall can accommodate up to 260 people. It was built between 1905 and 1909 according to the project of the architect Bernardini and was renovated in 1915 by the architect Giovannozzi, who combined the characteristics of Liberty style with some details of Baroque and Rococo styles. A large porch at the entrance introduces the neo-Renaissance style. Before it became a thermal building for spa treatment it had been the town casino.